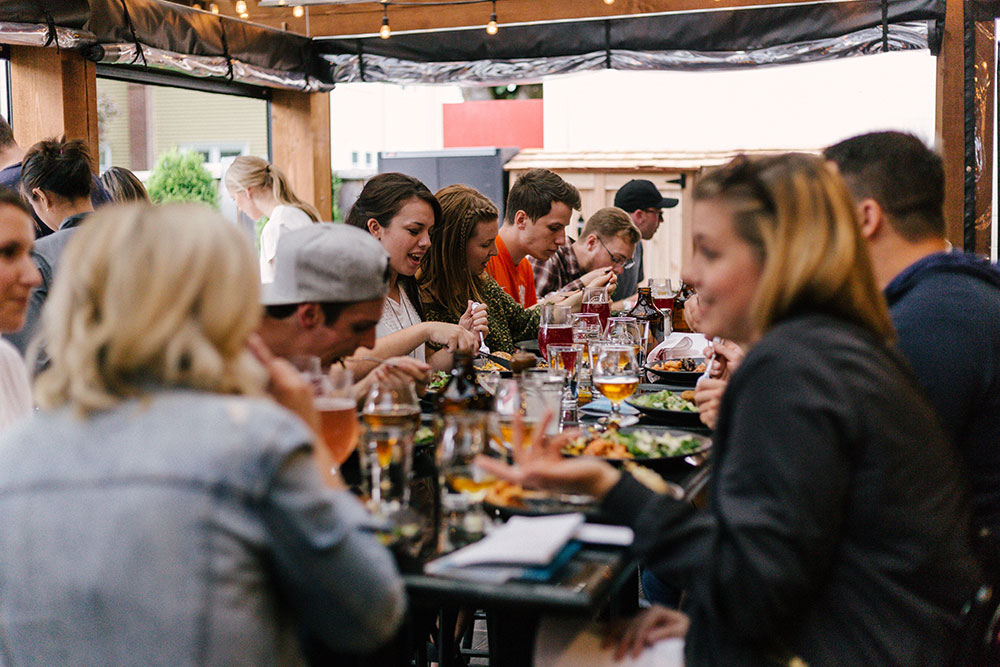 We all know the basics of health 101: eat your veggies, go to the gym and get proper rest. But how many of us know that social connection is as important? Social connection improves physical health and psychological well-being. One telling study showed that lack of social connection is a greater detriment to health than obesity, smoking and high blood pressure. On the the flip side, strong social connection leads to a 50% increased chance of longevity. Social connection strengthens our immune system. Research by Steve Cole shows that genes impacted by social connection also code for immune function and inflammation), helps us recover from disease faster, and may even lengthen our life. People who feel more connected to others have lower rates of anxiety and depression. Moreover, studies show they also have higher self-esteem, are more empathic to others, more trusting and cooperative and, as a consequence, others are more open to trusting and cooperating with them. Social connectedness therefore generates a positive feedback loop of social, emotional and physical well-being. Unfortunately, the opposite is also true for those who lack social connectedness. Low social connection has been generally associated with declines in physical and psychological health as well as a higher propensity to antisocial behavior that leads to further isolation.

Despite its clear importance for health and survival, sociological research suggests that social connectedness is waning at an alarming rate in the US. A revealing sociological study showed that the modal number of close confidantes (i.e., people with whom one feels comfortable sharing a personal problem) Americans claimed to have in 1985 was only three. In 2004 it dropped to one, with 25% of Americans saying that they have no one to confide in. This survey suggests that one in four people that we meet may have no one they call a close friend! This decline in social connectedness may explain reported increases in loneliness, isolation, and alienation and may be why studies are finding that loneliness represents one of the leading reasons people seek psychological counseling. Those who are not socially connected are more vulnerable to anxiety, depression, antisocial behavior, and even suicidal behaviors which tend to further increase their isolation. Most poignantly, a landmark survey showed that lack of social connectedness predicts vulnerability to disease and death above and beyond traditional risk factors such as smoking, blood pressure, and physical activity! Eat your greens and exercise, yes, but don’t forget to connect.

Brene Brown, Professor at the University of Houston Graduate College of Social Work, specializes in social connection. In an interview, she told me: “A deep sense of love and belonging is an irresistible need of all people. We are biologically, cognitively, physically, and spiritually wired to love, to be loved, and to belong. When those needs are not met, we don’t function as we were meant to. We break. We fall apart. We numb. We ache. We hurt others. We get sick.” We are profoundly social creatures. We may think we want money, power, fame, beauty, eternal youth or a new car, but at the root of most of these desires is a need to belong, to be accepted, to connect with others, to be loved. We pride ourselves on our independence, on pulling ourselves up by our own bootstraps, having a successful career and above all not depending on anyone. But, as psychologists from Maslow to Baumeister have repeatedly stressed, the truth of the matter is that a sense of social connection is one of our fundamental human needs.

For those who doubt, just think of the sting of rejection. A brain imaging study led by Ethan Kross at the University of Michigan suggests that the same parts of the brain are activated during social rejection as during physical pain. Another recent study lead by Shelley Taylor at the University of California Los Angeles suggests that stress due to conflict in relationships leads to increased inflammation levels in the body. Both physically and psychologically, we experience social connection as positive and rejection or loneliness as negative.

Are you shy? Is it hard for you to meet people? Rest your worries. The most interesting fact about connection is that it has nothing to do with the number of friends you have on Facebook or the amount of community groups to which you belong. If you’re a loner or an introvert, you can still reap the benefits. How is that possible? A sense of connection is internal: Researchers agree that the benefits of connection are actually linked to your subjective sense of connection. In other words, if you feel connected to others on the inside, you reap the benefits thereof! That is good news. While many of us cannot always control the number of friends we have, one thing we can take responsibility for is the state of our mind. Ever felt lonely in a crowd or a group of your own acquaintances? In the same way, it is possible to feel connected in a group of strangers. We can foster, nurture and build our internal sense of connection. It just takes a little courage and a spirit of adventure. In the next series of posts (updated weekly) I’ll be exploring science-based ways in which we can increase our social connection to others.